Steps of an Action 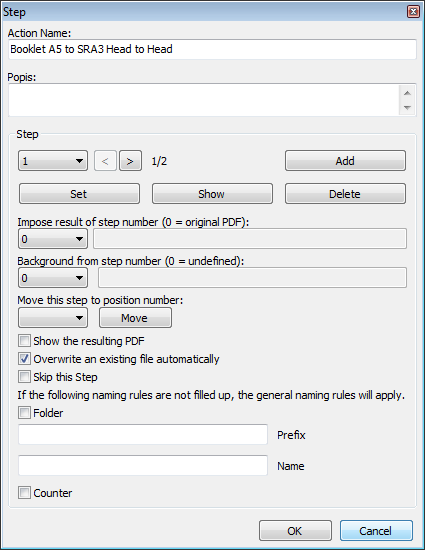 Each STEP of an ACTION is defined in this dialog.
Name and Description of an ACTION are the same for all STEPS.

The current STEP number is shown. Use arrows next to it to move backwards/forwards. Number of STEPS is also shown.

If set to 0 (Zero): the original background definition is used. If there is a file defined as background, the file is searched for at the exact location (folder + name, absolute path).
If set to a number bigger then 0: PDF that was created in the STEP of selected number will be used as background for imposition in this STEP.
If set to "Name": input the name of a file to impose (e.g. "background.pdf"), that should be used as background in this imposition. This file is searched for in the folder where the original PDF is.
"Move this step to position number:" choice: change position of a STEP inside current ACTION.
"Show the resulting PDF" checkbox: PDF created by this STEP will be opened in Adobe Acrobat after the ACTION is finished.
"Overwrite an existing file automatically" checkbox: PDF is saved without checking whether a file of the same name already exists.
"Skip this Step" choice: this STEP will be ignored.
Naming rules: if none of the rules is used, the files will be named according to general rules set in PLDA. The filename is built by combining the elements "Folder + Prefix + Name + Counter". If "Name" is not defined, the original PDF filename (without extension) is used. Define "Name" WITHOUT the extension (for example "RESULT").